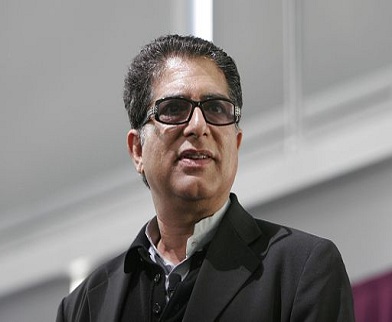 As we continue to look at great  spiritual teachers and self help authors, let’s take a look at the renowned Dr. Deepak Chopra.

Deepak Chopra is a doctor, best selling author and arguably the world’s most famous alternative medicine guru. A prolific author, he has written over 70 books which have been translated in 35 different languages, and sold over 20 million copies world wide. Chopra has done more than any other person, to bring alternative medicine into the mainstream consciousness and make it an acceptable compliment to traditional western practices.

Deepak Chopra was born in New Delhi, India in 1947. His family was comfortably middle class with his father one of the most famous cardiologists in the country, working as head of medicine at Mool Chand Khairati Ram Hospital. When it came to choosing a career Chopra initially rejected the idea of following in his fathers footsteps. Instead he decided he wanted to work as a journalist. However over time he become fascinated with the world of medicine and decided to enrol in the All India Institute of Medicine.

In 1968 Chopra made a decision that would be a major turning point in his life. He decided to move to America and did so with only $25 to his name and the promise of a residency at a New Jersey hospital. He quickly become something of a rising star, gaining his licence to practice medicine in Massachusetts in 1973, and was eventually made chief of medicine at New England memorial hospital.

Despite his success, Chopra was far from happy with both his work and the way that his personal life. Chopra was stressed out and overworked, smoking more than a pack of cigarettes a day, as well as developing a drinking problem. Talking about this period in his life, he noted that many of his colleagues were also “Very unhappy people” and that addiction was rife amongst physicians. He was also disillusioned with the limits of western medicine, which he viewed as only being one part of a bigger picture.

This culminated in another turning point in Chopra’s life. It began with reading a book on Eastern medicine. This confirmed to Chopra that western medicine did not have all of the answers, and began his interest in alternative forms of healing. This was shortly followed by a meeting with Maharishi Mahesh Yogi, where he discussed the path he was on and where he wanted to go. The two of them ended up forming a company together which was Maharishi Ayur-Veda Products International. The company sold a range of alternative healing ayurveda products. At the same time Chopra quit his position as chief of medicine for the hospital.

By the 1990’s Chopra and Maharishi and parted company. Chopra moved on to a position as executive director at the Sharp Institute for Human Potential. This would last until 1996, when he would quit after disagreements with management at the institute. It was this year that he, along with neurologist David Simon, would start the organization he his most well known for: Chopra Center For Well Being which is located in La Jolla in California.

One of the key innovations introduced by Chopra and Simon at the center, was the practice of primordial sound meditation. This is an ancient form for mantra based meditation that Chopra had learned while studying in India. It is now taught in all of the Chopra centers by certified practitioners.

Chopra at this point in his life was already doing what he loved, but he wasn’t yet the celebrity that he would one day become. It was the release of 1993 book “Ageless Body, Timeless Mind” that would transform him into a star and a leader of the alternative medicine movement. The book would sell millions of copies and help to make Chopra a household name.

Chopra’s regular visit to the uber popular Oprah TV show, introduced him to an even wider audience. And in 1999 he was awarded as being one of Time magazines top 100 people of the century. Chopra is currently a weekly contributor to the San Francisco chronicle, as well as regularly writing for the Washington Post. From 2000 onwards Chopra has served as an adviser on the board of the National Ayurvedic Medical Association. He also serves as an adjunct professor at the Kellogg School of Management. In addition to his many professional successes he is also the father to two children with his wife Rita.

That’s his story so what do you make of Deepak Chopra ? Let me know in the comments below!

get it in you Email box first.